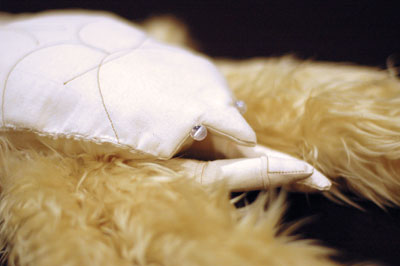 Inspired by the recently reported kiwa hirsuta lobster, I designed a plush toy. Although she’s not anatomically correct in every detail (PDF), I think she is an identifiable member of this new species.

For anyone interested in sewing one of their own, I’ve developed a pattern with instructions and released it under a Creative Commons license. I don’t recommend this project for people averse to hand-sewing or turning things inside out—there’s plenty of both involved. But it’s all simple sewing and assembly if you understand the basics of seaming and stuffing. 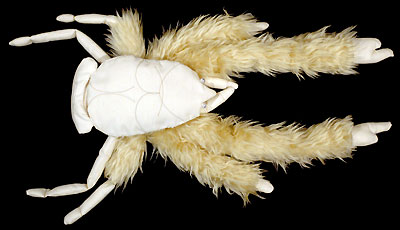 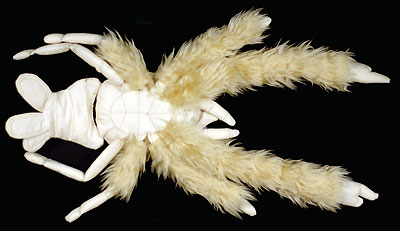 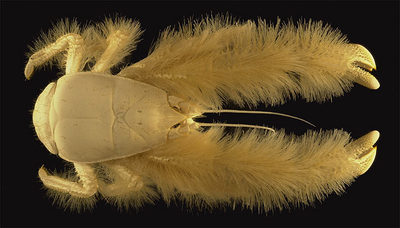 The original kiwa hirsuta lobster, discovered in the depths of the Pacific Ocean.

This pattern is licensed under a Creative Commons Attribution-NonCommercial-ShareAlike2.5 License.

Bravo! That’s just brilliant. I saw the original article and thought “abominable snow crab” and now there really is one.

Absolutely hilarious. I want one of these.

Seriously weird images, but I like whatever they are.

Tasty is great. How long did it take to make?

Tasty took most of Friday to make, but that’s because I was designing her as I went and pondering build methods.

I think an intermediate sewer could get her done in three or four hours. An advanced seamstress will undoubtedly find a cleverly improved and speedier construction method.

jh, download the pattern. I have some extra fur, spare cotton and a sewing machine - you can come over and make your own. :-)

Exxxxxxcellent! :D this made me happier than anything i’ve seen all day! i linked it from my craft blog (see URL). :)

She is cute indeed! So glad you posted pics so i could see her finished. Now, has she met the Zous yet? How did that go? Is Zoupi scared of her?

Fantastic! Very creative indeed! I take my hat off to you.

It must be so hairy,living in water in deep cold.Similar to Northern trout covered with hair similar to rabit hair.Confirmation of Darwin Theory and Inteligent Design at one species.

As a marine biologist who got far too excited about the original discovery (sadly I am a geek), can you imagine how excited I am that you have done this? Thank you so much.

I’m in awe! I bow at the shrine of your geekiness.

It’s not just a terrific idea, it’s marvelously executed. I congratulate you on your union of art and verisimilitude.

Kiwa is both kowai and kawaii. I love Tasty and think I may make a copy of her for myself. I think she would make a pleasant desk companion at my cubicle.

Hey, I’m working on a knitted one myself! Very nice! I’ve been tracking this furry little freak since it was named and it’s just about my favorite thing ever. What a lovely pattern.

AWESOME! If one wants more detailed anotomical sketches of the wee beastie, the original Zoosystema paper is online with some great line drawings- http://www.mnhn.fr/museum/front/medias/publication/6892_z05n4a3.pdf . Also, if you want to do something similar, but colorful, there is the closely related Hairy Squat Lobster aka Lauriea siagiani:

so are monkeys are the new crustaceans?

OMG that is awesome. Snagging the pattern, as my husband has become obsessed with these critters and now wants one of his very own.

You beat me to it! i was thinking about making a stuffed version of that creepy critter. :) oh well, now I won’t have to worry about making a pattern. Thanks!

This is the coolest toy ever — bravo!

This is the coolest thing since sliced lobster. Found you via Gawker. You rock.

feather quills for feelers? or whickers from Very Large Cats?

Meet Tasty, the Kiwa hirsuta,
a critter that couldn’t be cuta.
And you don’t have to go
‘leven cables* below
just to meet her. She’s truly a beauta.

Interesting that they all got called lobsters, even though they ain’t got no tails.

What I would do is to get a skein of that long-haired fun fur yarn and KNIT the tubes for the furry portions.

Congratulations! I hope this is going to be the beginning of a series for all the species of the deep. Have you thought about promoting it on Etsy (http://www.etsy.com)?

If you will sew me one, I will buy it

I would LOVE to own one of these, but I can’t sew for beans either. I (Jessica Wallace) am one of the scientists who was ON the cruise that discovered this guy last year, so somebody please make/sell me one! That would rock!!!

Fantastic! you took a long time to make it ,right?
can you make it in differrent color??

I am working on making one! My first Lobster will be a light pink flowery calico pattern (a very feminine Lobster) and I am already planning my next, which I will make for my sister. It will be hot pink faux suede with Very deep pile “disco” fur. Thanks for the pattern, I am having so much fun making my lobster!
Will you come up with a mosquito toy pattern? I have a mosquito puppet that is probably 20 years old, and I want to make myself a new one. I can send pictures if you are up to the challenge! Thanks again - Melissa

this is brilliant, i thought to make one since my fiance fell in love with it immediately. i explained to him that they were not available as pets when i searched e-bay. thank you! he will have his furry lobster soon enough!

But well, a pity if you cut the present eyes, now. Never mind!

it resembles the one in the pic very well. Nice jobb!!!:D

How funny to run across a familiar image on BoingBoing today! Apparently, Tasty is now a blogospheric celebrity. I’ve been quite taken with her ever since she first showed up in my Bloglines feed, and here she is again, a star. Well done.

I love lobsters and I love this so much! Thanks for brightening my day.

that was a freaky lobster thing

holy schizophrenic monkeys! how in the freakin heck did you make that thing? I can’t wait to make one for myself!

This is the coolest thing ever!! I stumbled across a picture of the real one in Scientific American magazine, did a search online, and yours is one of the sites that came back. Now, I just wish I could sew! I’m going to have to try and find someone who sews I can talk into making one for me. You don’t make them to sell, do you? If so, hit me back at my email address - just put “furry lobster” in the subject line, and I’ll know who you are! :op

Wonders if Tasty is Tasty?

Hello to everyone who’s been commenting. Thanks.

I’m not planning to make any copies of Tasty myself, but the pattern’s been downloaded 1797 times so perhaps you will find someone who can make one for you.

Ah, the eyes. They were a difficult decision. I know the real kiwa hirsuta has only vestigal eyestalks, but Tasty looked much friendlier with eyes. I used clear beads to indicate they didn’t work like regular eyes. :-)