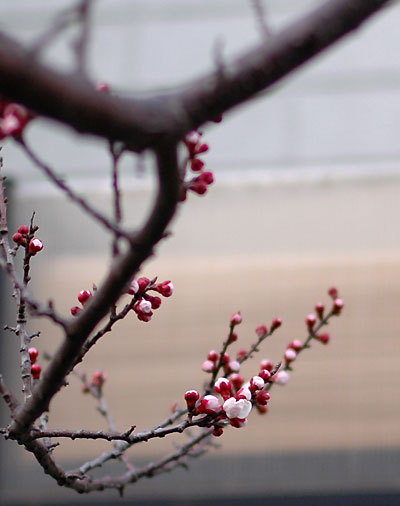 We’re in the season between plum and cherry blossoms. Some of the late ume are still blooming and a few hardy sakura are just beginning to open. I caught this one in the act yesterday afternoon in my neighborhood. Official blooming is predicted for March 25th in Tokyo.

My husband and I spent our past two springtimes in Japan, and now we’re in Canada facing a sakura-less April. Thank you for lessening my homesickness a bit.

So how do you tell the difference between sakura and ume? The smell (or lack of one for sakura)? I would have guessed the tree in the photo was ume just by looking. Not to mention peach blossoms!

I was down in Izu a couple of weeks ago. The Kawazu Sakura blooms much earlier than other types although it was two weeks late this year. It was amazing and the bright yellow rape seed (nanohana) below just made it all the more spectacular. It felt strange doing hanami so early in the season though ;-)

One way to tell is the direction of the stripes in the bark. Stripes in ume bark run along the length of the tree (vertical); sakura bark stripes circle the tree (horizontal).

I honestly can’t tell by looking at the blossoms themselves, despite the traditional graphic depictions of ume with round petals and sakura with heart-shaped ones. In real life that’s not exactly true.

This particular tree I’ve watched for several years and it is always an early bloomer.

Did you find SAKURA blooming alreday? Wonderful. I love SAKURA. In my neighborfood UME is blooming. I think the coloer is completly different. UME is white or thinkc pink or red. SAKURA is pale pink. And the sahpe of UME is more round than that of SAKURA.