Today I’m taking the Neon Chopstix scripts and doing the breakdowns to make our production boards. I’ve been looking forward to this for months, but it’s turned out hte be more of a challenge than I expected.

A breakdown is when you go through the script and list, scene by scene, all the actors, props, effects, crew, equipment, sounds, costumes, and locations needed to film the scene. Once you have the breakdowns, you can budget and schedule the production—the production board is all breakdowns organized into shooting days.

Making the breakdown lists is lots of fun. I’m using software called FilmMakr, essentially a complex Excel macro, to do the breakdowns so they look pretty and can be neatly organised. Look at all the colors: 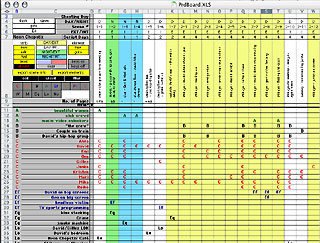 What’s difficult is deciding where to break things up. A scene might be only two pages long but could have cutaways to objects or other people, might have a section that involves a special effect, or multiple cameras. Each cutaway or effect requires a different location, setup, equipment, etc. but they aren’t separate scenes. I just don’t know quite how far to take the breakdown…