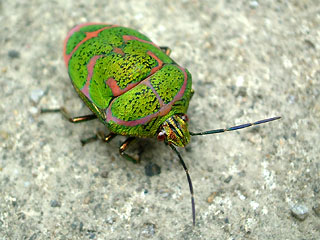 I’m not sure what sort of beetle this is, but it’s lovely, isn’t it? I spotted it on the steps in a park near Kourakuen station.

The praying mantis appeared in the same location the day after the beetle. The toad, bufo japonicus formosus, also known as Azuma-Hiki Gaeru or Common Eastern Toad, also lives in the park. There are dozens of them and they like to hop around on rainy nights.

I really like the first two photos, howd u take them ? exifs?

I was in japan recently for 3-4 days on my way to canada and I think its a beautiful country, wish I was able to spend more time there.

check out my photos on photo.vritti.net

All three photos were taking with my Fujifilm Finepix 4500. The insects were taken in macro mode; the toad was shot at night with the flash.

It’s neat to know that there is still wildlife and a whole other ecosystem, especially in such a busy, developed place like Tokyo.