I recently read about the 100 Mile Diet, a year-long project by two Canadians to eat only foods that were grown or raised within 100 miles of their home. It turned out to be quite a challenge for them as they discovered there was no locally grown wheat, no fresh vegetables until May, and that sugar really is necessary to make jam.

They uncovered many interesting facts about food production in North America. Here are a few excerpted facts from their 100-Mile Index:

Could I do this? I checked a map and drew a 150 kilometer circle around our house. 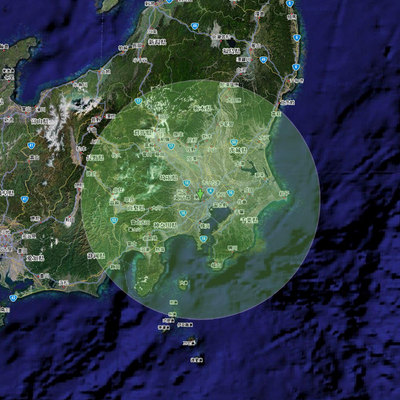 I can eat things from many of the nearby agricultural centers, including all of Chiba, Kanagawa, Saitama, Yamagata, Ibaraki and 95% of Tochigi and Gunma. There’s a good swath of ocean in there, too, so seafood would not be out of the question.

And since many Japanese grocery stores label the prefecture of origin of their produce, meat, fish and other items, it might not be so hard to manage. The local growers produce good variety in every season, too, to I shouldn’t be stuck with a winter menu of all potatoes.

I think I’ll give it a try, starting with a 100-mile dinner or two. I think I’d miss sugar too much to make it a permanent thing, but maybe making more informed choices while shopping will help reduce the food transportation burden I am putting on the world.