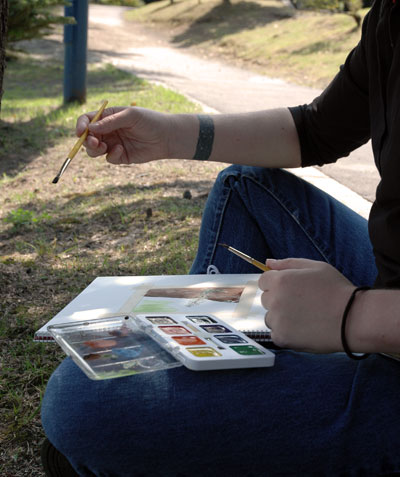 Having quickly tired of the bath and hotel, I spent the second morning drawing a little bit of tree trunk after having another walk around the grounds. I made a recording of birds sounds with a stream burbling in the background (and a bit of a breeze, too).

(Click to see the photo Tod snapped while I was recording—if you listen carefully, you can hear his camera’s shutter.)

After lunch, Tod rented a bicycle and scouted out the rest of the complex while I sat on a moss covered rise to execute a a bunch of 60 second sketches as a drawing exercise.

We were to take up the tour again at 14:20, but the bus was two hours late—stuck in traffic on the way from Tokyo. By the time we left the hotel theday was fading. Our apple picking and grape picking were reduced to short hops off the bus at roadside stands in the pitch dark to be handed some fruit and shuffled back onto the bus. Terribly disappointing, as I’d looked forward to standing in the orchard and smelling the fruit and the earth.

We arrived at home 4 hours late. We’ll never do a bus tour on a weekend (particularly a holiday weekend) again.

I heard it! About midway. Beautiful birdsong.