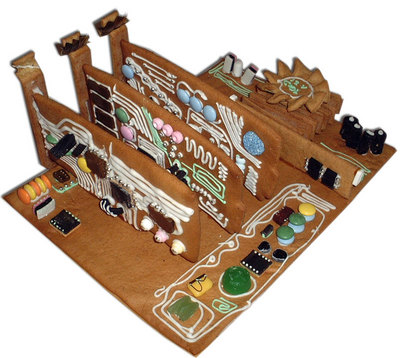 This is the most clever use of holiday gingerbread ever. I love the details done in licorice and chocolates.

It was posted by “Pab” on 4channel.org. Also found on that site, a Geek-mas tree and a gingerbread laptop, though I think maybe Santa needs to consider a new OS.

UPDATE - This gingerbread computer was created in Sweden. An entire folder of photos featuring Benny, Monica, Anna-Maria and Erik and their gingerbread building party is at monixa.se. They even made a gingerbread violin.

UPDATE - The tree decorations are by Joe, aka JavaMoose. He mailed me an updated image which is now linked above. Thanks, Joe.

UPDATE - Hello, Slashdotters! We’re doing our best to keep up with you. Merry Christmas. love, Kristen

hahaha, those are great uses of gingerbread :) though i agree with the choice of OS.. switch to mac!

This computer is SWEET!

I’m not being snide or anything but your gingerbread CPU has everything in it BUT the CPU.. We can clearly see the fan and the heatsink, but there’s no CPU. Your box is obviously deficient (no offense, it really is pretty and all…)

How are you supposed to see a CPU when it’s covered up by a heatsink, anyway?

I’d like to have that hardware into my PC ;)
Excellent work!

In reply to Josh Davis etc…

Must be an Abit board .. the caps are swollen !!

Sweet Christmas, Does It still exist or did someone already polish It off?

Well, I have no idea why some take it seriously while forgetting the true purpose of this whole thing! ITS FOR FUN! Getting deep into details just makes you look like a moooooo!!!

Hey, I would like to benchmark that system and try HL2 on it LOL, talk about MELTING System :p

Sweety Sweet System no doubt! Well made…
Now I know what I want for my wedding party!

Hopefully we’ll get to see a full computer (Case and all the goodies inside) from these people =D.

the cards are too big for the board(not serious)

Did you overclock it yet?

I say go for a silent computer. Further modding should be done to ditch the fans and replace them with milk cooling.

Nice work, guys. Every detail, right down to the CPU completele with Heatsink and Fan.

Uniqueness to the max. And you can eat it when it fails, too :)

SO looking forward to the milk cooling! I wonder if ASUS will have a version of this board out by Christmas… :)

MILK COOLLLING!! LOL THATS GOLD!!!, why am I the only 1 laughing?… you know instead of water coo… yea im a nerd

The post about this board are almost as classic as the picture.

Yes, but, does it run Linux?

Just saw a mini-itx version of this yesterday - and this one works!

Yes, but does it run Linux?!

Imagine a beowulf cluster of these

Be sure to switch it off before you bite into it!

Once I baked a CPU when the cooler fan died.. now if I’d only left it a little longer it might have become half as sweet as this baby ! Well done Benny, Monica, Anna-Maria and Erik ! (are these guys related to ABBA?)

Yumm! Ive had one of these before, a baked motherboard!

So how many more hits is this site getting today? =P

Was going to say “Sweet CPU!” but that gag had already been used. =(

Certainly looks good.
Can I have it for making sure it runs my OS :)

Great job guys! The only thing I think you might want to add would be enough room for a very small computer, like the open brick (http://www.openbrick.org). If you created a gingerbread compartment of the right size, you could actually boot up the computer! :-D

Hi, Kristen! Thanks for the extra effort… my wife and I have made several (very tired) comments on how awesome the gingerbread computer is.

What’s it like dealing with the Slashdot Effect? :D

Also, Abit got their capacitor issues fixed a LONG time ago. VIA is the new Abit - their Mini-ITX boards are doing the capacitor blowing thing ;-)

I hope Monica and the crew in Sweden are holding up to the fame and server load.

but do you know the muffin man he can upgrade your gingerbread computer ….

Nice. I guess I’d eat it before too long.

Nice. Can you go wardriving with the laptop?

Coincidentally, it has the same life expectancy of my e-machine.

Obviously it is a prototype, its still on the breadboard!

Was the cake cooked with the CPU’s heat?

These computers are known to have a problem where the capacitors blow and leak frosting all over the gingerboard. The computer will certainly get buggy after that!

i thought it was a functional computer…
built around gingerbread or a compuer with a gingerbread case.

Did you see the PC inside a Gingerbread village that mini-itx.com posted last Christmas?

The picture has been stolen without credits from this page:http://www.monixa.se/bilder/blandat/041207%20-%20Pepparkaksdator%20och%20fiol/37_Datorn%20klar!.JPG

tlund: hello, read the post…credit was given in the first update as soon as I discovered the source of the photo. I stole nothing and even mailed Monica to let her know we’d been slashdotted. Geesh.

Heh, but does it RUN GNU/LINUX?

And upgrades are efficient too! Just cook up a new board and eat the old one. Mmmm, upgradelicious….

My Office mate asked if it really works. We told him it fails POST and just beeps.

You *SO* rock!!! Wish I’d seen this before the Linux User’s Group potluck meeting last week. Am definitely stealing the idea for next year, though.

You *SO* rock!!! Wish I’d seen this before the Linux User’s Group potluck meeting last week. Am definitely stealing the idea for next year, though.

TOTALLY LOVE IT! Great use of food as technology, and yes… you are getting slashdotted! CONGRATS!

CPU = Central Processing Unit
In other words; the chip that costs several hundred dollars which does all of the processing.

So what is illustrated happens to be a motherboard, 3 cards, a heatsink/fan assembly (probably on top of the actual CPU) and some ram.

Valliant efford was made!
Those are some gigantor cards, btw.

CPU = Central Processing Unit
In other words; the chip that costs several hundred dollars which does all of the processing.

So what is illustrated happens to be a motherboard, 3 cards, a heatsink/fan assembly (probably on top of the actual CPU) and some ram.

Valliant effort was made!
Those are some gigantor cards, btw.

Hmm… Yeah, you need to go outside. (But it’s still cool even with the NERD ALERT)

sweet motherboard! ha! i love it!

cpulicious!!! i’d love to benchmark it!
great idea! i’m the only one who feels a little guilty to try that sweetness!? :)

Is it made out of that christalized sugar some time ago the cake Billy got in its face ?

Must have been created with Spice!

Take that sucker to your next LAN party and watch all the geeks drool! Literally.

The first time I hunger for a motherboard…

I like the Spice comment Arniec, though I doubt many people will get it ;D - I think you would have a really hard time finding model files for M&M Capacitors :)