Do you keep a journal?

As a teenager, I kept a diary for six or seven years—full of the angst or exams and the trials of never having a date—that I wrote in frequently, if not daily. During the dormitory years at college, my diary transformed from lovelorn ramblings to costume sketches and reminders to go to class.

For years, I carried a sketchbook everywhere. That was fantastic. I paid a lot more attention to things around me. Any time I was bored I would grab my book and pen and draw whatever was handy. I did hundreds of little sketches. Some of them are horrible and others are quite good. I took notes in my sketchbooks, too.

But somehow, I stopped doing that. These days (in addition to this weblog) I keep a motley a variety of notebooks filled with to do lists, user interface designs, observations made on the train, grocery lists, meeting notes, and drawings. But I have too many of them. One in my bag, another in a jacket pocket, one on my desk…

So I declare today “starting the journal anew” day. I will keep a better journal. “Better” meaning I carry one with me everywhere and I use it creatively every day. Care to join me? 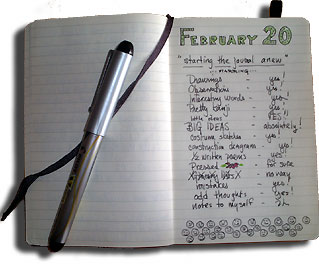 Notebooks have helped me transcend my love for fountain pens into a love for notebooks: I have a small pile of moleskines, and a few others, offered by dearest among friends.

I love to write or scribble on them, and I should do that more.
No, I *want* to scribble, write and sketch more, I just needed a pretext to kick my lazy butt and do it. I guess you just provided me with one…
http://yoda.zoy.org/neurones/2004/02-20-si_javais_un_stylo.html

I bought the Moleskine in August last year—probably at Loft or Tokyu Hands or somewhere similar.

My handwriting is terrible. I am even embarressed when I send handwritten cards and *gasp* snail mail. (Yes I do send them occassionally. Just this week as a matter of fact)

What exactly is “angst”? It’s obviously the german word for “fear”. But it seems there is more to it…

I loved your childhood jounals…not that I read them, mind you, but you were always able to pinpoint when the first robin was sighted or when the very nasty snowstorm hit.

I have way too many places to jot things down and so today I’ll join you in keeping one journal/thoughtbook.

I agree with those who said their handwriting is terrible, mine is as well. I think these blogs have served as my journal for the last 4 years, both in day to day life and through our entire pregnancy experience. It will be cool to someday show Evan what our life was like while we were expecting him.

I’ve kept handwritten journals almost all my life, although in the 1990s I found myself relying more on the computer. But I’ve recently discovered that typing (although faster and easier to edit and correct) produces quite a different result than writing by hand. When I write with a computer, my writing goes into “explain/describe” mode. When I write by hand, my writing becomes meditative. I usually end up writing about something entirely different than what I began thinking about—and it usually is a revelation, almost a message from my unconscious.

Just recently (during a spell of cold weather), I’ve been trying to write a little in a journal every morning before I get out of bed. This is a new habit for me since what I usually do is get up and check email and blogs while drinking my morning coffee.

Why is it that I can’t seem to swing a cat lately without hitting someone scribbling in their moleskine?